That's 'Ulster Soviet Socialist Republic', of course – one of the last remaining examples of state control of the economy in the world. And it's getting worse rather than better: 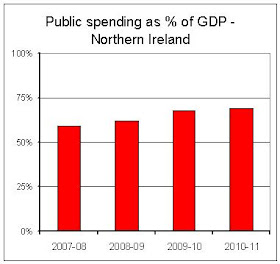 The public sector in Northern Ireland will account for 69.2 % of total GDP in 2010-11. Even in communist Cuba the state accounts for only around 60 %. Northern Ireland is probably second only to North Korea worldwide in terms of state control of the economy. 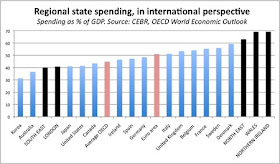 The question is not whether there are cuts coming, because there are – but rather what people in Northern Ireland are going to do to get out of this hole of dependency. It is a disgraceful situation for any people to be in, and anyone who argues that this is 'normal' or 'justified' or even 'acceptable' is irresponsible.
Horseman at 11:13